The DPA would have you believe that ALPA National attempted to stop the United pilots from picketing the White House.

Here are the United pilots picketing in front of ... The White House ... a full WEEK before the DPA published their piece.

How do you explain this? ALPA put it in their update and published the photos but the DPA says it ALPA refused the picketing? 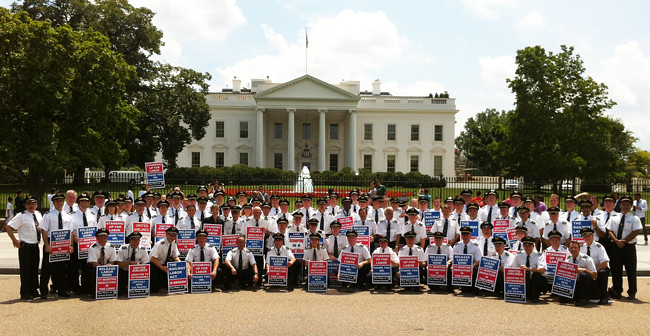 Nearly 125 United pilots took their message to the front steps of the White House during a nearly two-hour informational picketing event on Monday.
Braving heat and humidity, the pilots walked a continuous orbit carrying signs that read, “Release Labor Now: 17 Months’ Mediation Is Enough,” “Standing Up for Labor: Thank You, Mr. President,” “United Airlines: Addicted to Offshoring: Let’s Fly with United Pilots,” and “Help Us, President Obama: Labor Needs You.”

MEC chairman Capt. Jay Heppner, who joined the picket, and SPSC chairman Capt. Pieter Velzeboer wish to thank all the pilots who came out to help us express the United pilots’ frustrations with prolonged negotiations for a joint collective bargaining agreement and to communicate the pilots’ concerns about United’s sustained practice of offshoring our jobs.


...but the DPA says this was ALPA backpedaling to cover their tracks. Really?